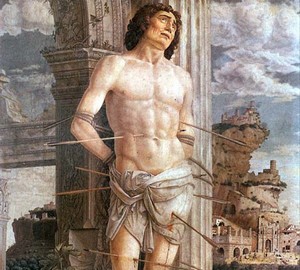 Saint Sebastian – Andrea Mantegna. Around 1480. Tempera on canvas. 257×142
Saint Sebastian – a popular image in the visual arts, which many painters turned to, painting a fierce episode of his martyrdom – suffering from arrows fired at him. St. Sebastian in III-IV centuries secretly professed Christianity. Upon learning of this, the ruler Diocletian sentenced him to death. But the wounds inflicted on the saint did not become fatal. His wife was secretly leaving him, and he, although not fleeing Rome, was miraculously saved before Diocletian. The emperor again ordered the execution of the saint.

In the painting “Saint Sebastian” by Andrea Mantegna, painter and engraver of the Early Renaissance, the saint is tied to a fragment of an antique column, the lower part of his body is dotted with arrows. The column, as part of the ruined ancient temple, symbolizes the world of paganism, slowly falling into oblivion, for which the emperor held so tightly and whose sacrifice fell St. Sebastian. Near the feet of the unfortunate young man, a marble fragment of the crashed statue, which once stood in this place and glorified the Greco-Roman gods, was preserved."