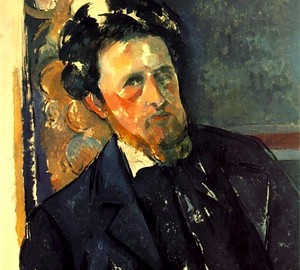 Portrait of Joachim Gasquet – Paul Cezanne. 1896-1897. Canvas, oil. 65.5×54.5
On this “Portrait of Joachim Gasquet” depicts an educated, literally gifted guy, a professional lyric poet with whom the painter became close in Aix. “Blue-eyed student”, as his friends christened the young man, having barely managed to pass an exam for a bachelor’s degree, began to publish his own magazine, and at 23 he married a beautiful girl, a muse of Novo-Provencal poets, Maria Girard. In this happy time, he met Paul Cezanne, whose canvases conquered him at first sight. An elderly artist and a young writer praising the joy of life quickly found a common language. They often talked, taking long walks around the neighborhood.

Cezanne, being a friend of the Gasquet family, wanted to paint a portrait not only of Joachim himself, but also of his father and wife. However, even this only work was not finished. Believing that a special order, perseverance, and self-discipline, which nature lacks, are concentrated in a person, Cezanne in the late period of creativity was especially serious about the choice of models, preferring to capture people who are prone to reflection and are able to stare intently into the world around us. But this task was quite difficult for the artist, big problems arose when the portrayed person (like Joachim Gasquet) had a fine mental organization. Trying to find a way to image, revealing not only the external similarity, but the internal essence of the model, Cezanne violated the proportional structure of the figure, increasing the material density of color. But seeing that all these efforts did not allow to fully reveal the image, the demanding artist left the picture unfinished."