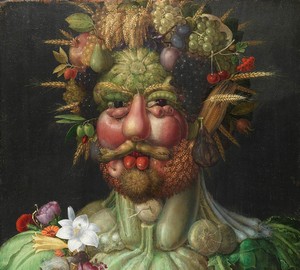 Vertumn – Giuseppe Arcimboldo. (Portrait of the ruler of Rudolph II in the form of Vertumn). Around 1590. Oil on canvas. 70 x 58 cm
For this portrait, the painter received the title of palatine graph from his own patron, ruler Rudolph, and the title of “grandfather of surrealism” from our contemporaries, although art historians systematize his painting as a work in the mannerism style.

The portrait of Rudolph represents an allegorical image of the ruler in the form of the ancient Italian god Vertumna – the patron saint of natural transformations, the god of gardens and fruits. Usually he was portrayed in the form of a gardener with a knife in his hands, with which he cut the plants and collected the harvest. If the traditional image had fruits and vegetables in hand as a sign of its purpose, then Arcimboldo went much further. His Vertumn is himself an allegory of productivity. His image is assembled from individual parts – fruits, berries, vegetables and flowers. All together, this forms a portrait with quite recognizable features. This is the special gift of the master.

He masterfully chose and arranged the fruits so that they form the body, face and outfit of the emperor. The color scheme of the picture is gorgeous, every detail in its place. Using the forms of vegetables, the artist managed to convey the sculptural forms of the body, especially the neck and chest. This is truly a masterly work – green onions, zucchini and pumpkin perfectly reproduce the relief of the body, and a garland of flowers and vegetables becomes a magnificent sash.

Special attention is paid to the work on the face and head. A lot of labor and imagination is invested in this. Each part of the face is a separate fruit, berry or fruit. Peaches – cheeks, nose – pear, lips – cherries, even a beard and mustache are made from natural components – ears, seeds, beans, and the emperor’s characteristic chin is depicted using a “shaggy” chestnut shell.

The artist even managed to convey the greatness of the emperor by depicting golden wheat ears in the form of a crown on the head of Rudolph from lush brushes of grapes. It is not surprising that the emperor liked the portrait so much, because he was an extraordinary man, who loved and appreciated everything rare and unusual."