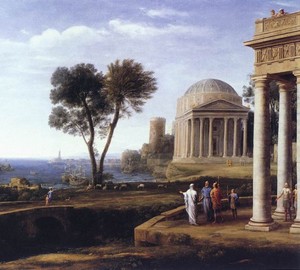 Landscape with Aeneas on Delos – Claude Lorren. 1672
The choice of characters in the picture of Claude Lorren (1672) takes us to the idyllic world of the heyday of ancient culture. The plot is based on the story of how Aeneas sought out the Apollo oracle on the sacred peninsula delos on the way from Troy. Before us, the ruler and priest of Delos Aliy greet Aeneas, his father Anchis and the offspring of Askanias. Aniy points to an olive tree and a palm tree in the center of the picture, for which Summer (Latona) clung, giving birth to the twins Apollo and Diana (Artemis). The Temple of Apollo is depicted in the form of the majestic ancient building of Rome – the Pantheon. In this temple, the oracle predicted to Aeneas that his descendants would rule over the most vast expanses of the Earth. The poetic composition of this scene, in which the vertical and horizontal lines are balanced, the clear air and the view of the vast expanses to a distant horizon, evoke a sense of idyllic serenity of the golden age.

VERGIL. The Roman poet Virgil (70-19 BC) was considered the king of Latin poets. His most famous work is the epic poem of Aeneid, which describes the journey of Aeneas from Troy to Italy. In the picture, Virgil reads Aeneid Augustus and Octavia (1787). Jean-Joseph Tayyasson portrayed Virgil reading a passage from this poem to the emperor and his sister."